Amarone is a traditional and unique method of wine making crafted only from Valpolicella grown grapes which are naturally dried in boxes and then pressed and fermented. The grapes for our Amarone are from the Pojega vineyard where the average vine age is at least 30 years.

Selected from three Cru vineyards (Calcarole, Pojega and Rovereti). At the heart of the Valpolicella Classico is the Corvina and Corvinone grapes which lend a distinct black pepper and dark cherry character to the wine, It has a rich, silky palate and full-body, offering plum and blackberry fruit flavours. Seriously smooth.

We recommend it to be decanted and served (16°C or 60°F) with roasted or braised meat, game dishes such as venison, curry based dishes or with hard, mature cheeses such as Pecorino di Pienza. 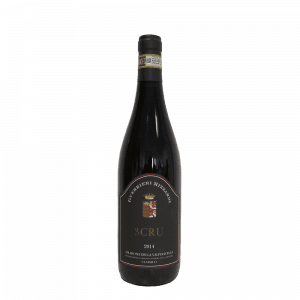